CWA members at DirecTV covered by the Orange Mobility contract in Eden Prairie, Minn.; Huntington, W.Va.; and Englewood, Colo., continue to mobilize for a fair contract. On Wednesday, workers at all three call centers held simultaneous informational pickets, calling on AT&T and TPG Capital – the owners of DirecTV – to meet their demands for affordable healthcare and adequate wage increases in a new contract. TPG says that it cares about the social impact of its investments, but one of the first things the TPG-approved management team has done since taking over is demanding huge cuts to healthcare and sick leave. “AT&T and TPG are more interested in pocketing profits than supporting workers like us,” said Rose Alvarado, Customer Service Representative at DirecTV and member of CWA Local 7750 in Englewood, Colo.“We are the people that DirecTV customers contact when they have problems using the service. If they truly cared about their customers, they would make sure that we had the support we needed to stay healthy and take care of our families.”

In the past, TPG has faced criticism for loading companies with debt and forcing them to cut jobs and sell off assets to survive. Sometimes TPG’s debt-driven deals and extraction of fees have caused companies to file for bankruptcy. “TPG Capital didn’t get DirecTV through the pandemic, but our members did. It’s time the workers were given the respect they deserve,” said Kieran Knutson, President of CWA Local 7250 in Eden Prairie, Minn.

The workers refuse to stand by as TPG and AT&T maximize profits at their expense. They are fighting back and demanding a fair contract that recognizes the value they bring to the company and the customers. Monica King, Customer Service Representative at DirecTV and member of CWA Local 2009 in Huntington, W.Va., said, “I work hard every day to make sure our customers are satisfied with their service. I shouldn’t have to struggle to put food on the table or worry about paying the bills while an investment firm benefits from my hard work and the hard work of my coworkers. Inflation and cost of living have skyrocketed since our last contract. We need adequate raises that keep up with inflation and will allow us to take care of our families. Workers, not private equity firms, are responsible for the company’s success. It’s time we receive our fair share of the profits.” 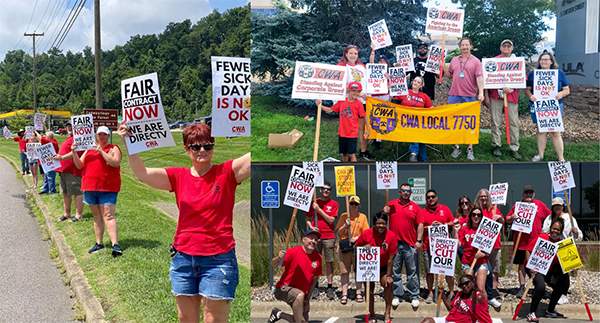 On Wednesday, CWA members at DirecTV covered by the Orange Mobility contract in Eden Prairie, Minn.; Huntington, W.Va.; and Englewood, Colo., held simultaneous informational pickets calling on AT&T and TPG Capital – the owners of DirecTV – to meet their demands for affordable healthcare and adequate wage increases in a new contract. 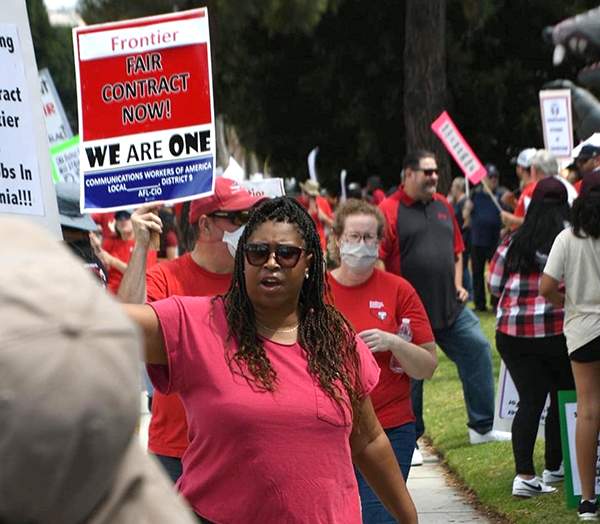 CWA members at Frontier Communications in California are continuing their mobilization efforts to build their strength at the bargaining table as they negotiate a fair contract with the company. On Sunday, members and supporters gathered in Camarillo, Calif., for a rally hosted by CWA Local 9575, to make their demands heard loud and clear.

CWA members at OFS Fitel, LLC, a company that manufactures telecommunications and fiber optic products, overwhelmingly ratified a new contract. The members at OFS locations in Norcross, Ga. (CWA Local 3263), and Sturbridge, Mass. (CWA Local 1400), have been mobilizing for months to build their power at the bargaining table. Most notably, the workers held regular workplace actions including pickets to demand a fair contract, passed a strike authorization vote, and applied pressure on the company by engaging the public. The new contract includes significant wage increases and a ratification bonus, an end to the two-tier wage system that ​​created different pay and benefit structures for long-term employees and new hires, no changes to medical benefits, and more. “I am proud of the incredible mobilizing our members at OFS engaged in over the last few months. It was not easy but the workers did not let up on their commitment to fight for what they deserve and reach a contract that reflects their value as the backbone of the broadband industry,” said Lisa Bolton, Vice President of CWA’s Telecommunications and Technologies sector.